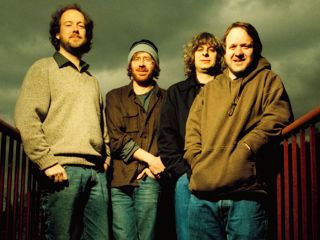 It's been one of the biggest "will they or won't they" reunion rumors of the year, and over the weekend the answer almost became a definite "yes" as three-quarters of Phish - guitarist Trey Anastasio, bassist Mike Gordon and drummer John Fishman - performed live together in two separate incarnations at the jam-heavy Rothbury Festival in Michigan.

First, Gordon joined Anastasio during the latter's solo acoustic set, which had already enthralled a substantial crowd gathered in front of the festival's main stage. "Mike and I are two people who don't shy away from trying new things," Anastasio said, introducing two fresh compositions, Backwards Down The Number Line and Alaska. Elsewhere in the set, he joked about the reunion speculation, saying, "If we could just find a drummer and a keyboard player somewhere..."

Later that day, Anastasio joined Gordon during the bassist's full-band set on the neighboring Sherwood Court stage for a rendition of the Phish favorite Meat. For the encore, drummer Fishman came onstage - to the defeaning roar of the crowd - and the three Phishermen performed a breezy version of The Beatles' She Said, She Said. Pandamonium naturally ensued.

Oddly, the one member of Phish who didn't take part in the almost-but-not-quite reunion was keyboardist Page McConnell, who recently took to the band's website and wrote that the members have been talking and would soon meet to discuss "possible futures." Are these guys merry pranskers, or what?