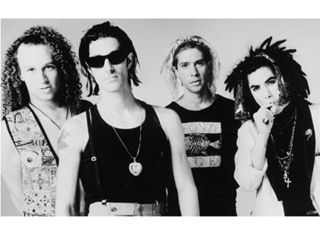 "I think they're really good," says Jane's Addiction frontman Perry Farrell of the pair of brand-new songs the reunited band has recorded. Farrell also says he "can't wait for people to hear" the tracks - but that might not happen for a while.

Before they hit the road tomorrow (8 May) with Nine Inch Nails (and Tom Morello's new band Street Sweeper Social Club opening), the reformed Jane's started to record new material, but they only got through two songs.

One of the cuts, Embrace The Darkness, Farrell calls "a festival anthem," while I'll Protect You concerns a pair of runaways whose paths cross.

Although Jane's Addiction recorded a pair of studio songs, Chip Away and Whores, that were included in a 1987 live album, the new tracks mark the first time that the band's 'classic' lineup, with bassist Eric Avery back in the fold for the first time since 1991, have worked together since the album Ritual de lo Habitual.

And in typical Jane's fashion, things haven't been exactly smooth. "We started to record and things got kind of ugly," Farrell told Billboard. "(Recording) is, like, the last hurdle for us. It's one of those things where the head-butting really came out when we tried to write...

"The way I look at it is I'm very patient. It's only been, what, 18 years? I can't expect things to be perfect overnight. There's still animosity 'cause it's 18 years' built up."

Which means, if you're waiting for that new Jane's Addiction album, be like Perry Farrell: patient.