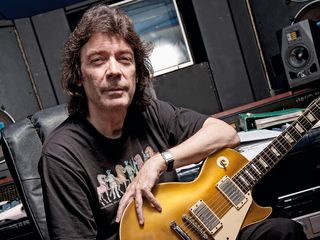 Steve Hackett: "In 1973, I felt I was playing in the best band in the world at that time".

Former Genesis guitarist Steve Hackett says he is shortly to release a double album of re-recorded Genesis tracks celebrating the band's epic work from the 1970s. He also revealed that Opeth's Mikael Åkerfeldt and Steven Wilson of latter-day prog heroes Porcupine Tree will feature on the record.

"It's a re-recording and re-voicing of a lot of Genesis things," Hackett told Guitarist magazine. "It should be out at the end of October."

"In 1973, I felt I was playing in the best band in the world at that time," he explained, "I'm concentrating on the era that's before that, and slightly after it, where the music was not afraid to be 20 minutes long at times - where you got a sense of journeying through the musical continuum."

The tracks will represent Volume II of an ongoing project, which has seen Steve re-record classic tracks by the band. Fans have had a long wait for this second installment, however, as the first volume - entitled Watcher Of The Skies: Genesis Revisited - was released 16 years ago in 1996.

Steve told us about the new record during a recent interview with Guitarist, during which he gave a personal tour of the guitars he used on the original Genesis recordings, also telling the story of the amps and effects that shaped his sound on groundbreaking albums such as Nursery Cryme.

"It wasn't really until I left Genesis - or maybe a bit before then, in 1975 - that I began recording using amp distortion," Steve said of the expressive tones he employed with the band in their early years.

"I couldn't have really used amp distortion with Genesis live because I'd be playing rock guitar over the top of Mike Rutherford tootling away on a 12-string. I was required to play 'pastoral' rock guitar, if there was such a thing: playing very gently with a distorted tone.

"Even in the days of doing Selling England By The Pound, I was recording quite quietly. And for the whole of Foxtrot in 1972, I was using nothing larger than aFender Champ, a Les Paul and two fuzz boxes - plus an Echoplex. And that was really it."

Pick up issue 359 of Guitarist, on sale on 24 August, to hear more about Steve's guitar collection and how he summoned up the guitar sounds that propelled Genesis to sales of more than 100 million albums.