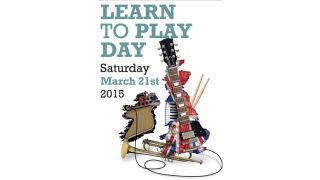 There's only one week to go until the 2015 national Learn To Play Day and rock stars and celebrities including Jools Holland, Gareth Malone, Tom Odell, Johnny Marr, Al Murray and many more are lining up to support the event.

On Saturday 21st March (and on Sunday 22nd March at some venues) over 120 shops and venues, all over the UK, will be running Learn To Play Days and will deliver more than 10,000 FREE taster music lessons. Here's what the celebrities have to say about the event:

Patron and big band leader Jools Holland said, "whether you used to play or whether you have always wanted to play, this is the day for you".

Tom Odell (Ivor Novello Awards Songwriter of the Year 2014 / John Lewis Advert) says, "I can't recommend anything else in life more highly, than learning an instrument."

Gerry Leonard (David Bowie guitarist) believes "learning to play the guitar changed everything for me…. it has been a magical magnificent journey".

Choirmaster Gareth Malone, Music for All's newest ambassador commented, "The work Music for All does is very important in helping the next generation of musicians realise their potential."

Comedian Al Murray observed, "Lots of people go through life regretting that they didn't pick up an instrument. We want to get kids into it."

Skunk Anansie guitarist Ace is giving FREE music lessons at Yamaha Music London, Aaron Spears (Usher drummer) will be performing and teaching drums at PMT Leeds, Jason Bowld (Axewound, Pitchshifter) will be holding a live drum session, and offering FREE one to one lessons throughout the day at PMT Birmingham and drummer Craig Blundell will be giving FREE one to one classes at PMT Manchester.

Event holders range from music shops, music venues, music services and even churches, here are some examples: At the Old Vinyl Factory, Hayes, the British Airways Brass Band, will be appearing. Joining them will be Pro Music International, Noisy Toys and Pioneer who, between them, aim to provide one hundred hours of FREE music lessons.

Meanwhile at StadiumMK, Milton Keynes, Korg UK are inviting visitors to FREE introductory lessons on a range of instruments. Fender's LTPD is an open house for any one interested in guitars at London's Royal Festival Hall in conjunction with the Registry of Guitar Tutors and will see bands Lower Than Atlantis and Arcane Roots teaching on the day.

Offers on the day include the Orange Rock Guitar Syllabus worth £14.99, available FREE on Saturday 21st March only. Yamaha Music School, Whitley Bay, Tyneside is offering the chance to win an electric guitar by striking a pose in the 'Rockstar Selfie Booth' in Park View Shopping Centre, plus many others.

Check out your local music stores and venues for details of their FREE lessons and workshops, live performances, visits from celebrities and dignitaries, and any competitions, offers and giveaways they may have.

To find out more visit www.learntoplayday.com where you can find your nearest event.