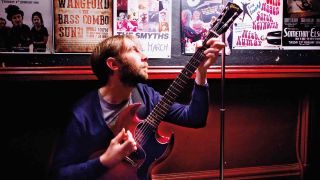 "Probably at my primary school in front of my class aged eight. I formed a band called The Dogs in which I'd sing Beatles songs in class while three guys that I got in just stood behind me and looked 'bandy'. It doesn't matter, they wanted to be in the 'band'. You could only be in the band if you or your parents had a Beatles cassette!

"It went well; Yellow Submarine went down a storm. The other guys always got more girls than me, though. Eventually, those three guys learnt an instrument and we became a proper band."

"Whatever's in the fridge, which has recently been Becks, Stella, Bud and Tennent's. It's always good news when there's some good food knocking around, too. You try to eat well on a tour, but that gets a little difficult after a while. I try to work off any crap food on stage!"

"2002 Gibson SG Classic, 2004 Gibson SG Junior, Fender Mexican 50s Telecaster, Fender Hot Rod Deluxe, Boss Tuner and Delay. I just added a Boss fuzz and tremolo, too. I love Boss pedals; they never let me down. Guitar-wise, I'm a sucker for anything with P-90s. They are so powerful, plus I don't see many people using them."

"My car… and record shops. If I'm waiting around, I tend to try and visit a record shop if I can. However, you could argue that these things are musical… Pants are an item that I couldn't do without on tour."

"Put your heart into your performance… and don't be afraid to take the piss out of yourself on stage. Just basically try and communicate on every level."

"For me, it's all about using the guitar and amp and not relying on pedals to do the work. The overdrive that I use is the drive that's on the amp, and it suits me fine. It's a 1999 USA Fender - can't see myself changing it. Maybe I'd add an extra enclosure, but that's it.

"The great thing about the Hot Rod is that it has the More Drive option that pushes the drive and the volume up for a solo/big riff. I love it. I mostly found my sound through playing at jam nights from the age of 13 to 18. I believe that jam nights are the best education for any musician starting up, as you get to play live with other people every week."

"There's been some dream gigs in the last two years. To support The Who a while back on their arena tour was mindblowing. It was one thing to play an arena, but to play it with The Who was another level. Pete Townshend is my guitar hero and all The Who were great, great people to be around.

"I'd say Shepherd's Bush Empire was a real highlight as I've been to so many gigs there and always wondered what it would be like to play it. It did not let me down. I always love playing in our hometown of Tunbridge Wells, and it's always a thrill to play in Glasgow."

"Leeds, summer 2006. It was the hottest day of the year. We were all bunched in a car with no air con and all our gear. We were stuck in a traffic jam on the M1 for about six hours in the blazing heat - no sun cream, fan or food. I was down to my undies and sweating bullets.

"We got to the venue with five minutes to get on and start playing. We did the gig in the hottest venue. I stumbled off stage, sat down on a bench and was sick in front of passers by - I was also dressed like a trendy tit."

What's the best heckle that you've ever received?

"People don't heckle any more, so I don't have one. One guy in Berlin once shouted, 'Boring'. That's as good as it gets. Even the heckle required no thought."

"In 2005 I looked a little like Nigel Tufnel. In 2011, I went to the Midwest USA for a short tour. We were playing in Michigan, in a theatre where the roof was falling down and dripping water on the stage. There were three people in the audience, one of which asked if they could jam along. They played the worst harmonica you've ever heard and wouldn't stop playing after we'd played.

"I went outside for a breath of fresh air after the show and the bar next door had a rowdy karaoke night on with some guy singing, 'Sometimes it's hard to be a woooomannn…' out of tune. Low."

"The Who, Live At Leeds. It changed my life completely. My guitar playing changed overnight. Instead of playing blues solos, it was now all about chords and power. The original 1970 album got me hooked, but when I heard the expanded 1995 version, that was the one that really got me. I Can't Explain on it is just full power. The 15-minute My Generation is unbelievable. It's the only 15-minute live track I've heard from that time that keeps changing. It never gets boring. Thank you, Mr Townshend!"