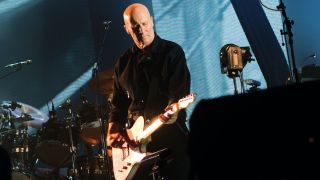 He's played with Peter Gabriel and Kate Bush, experienced hair-raising cycle rides to gigs and got locked out of venues, we talk road stories with David Rhodes.…

How did your first-ever gig go?

"It's difficult to remember the very first one, but two early ones were notable. I was in an experimental duo; a tape loops and noise band. We were doing shows with a puppeteer at the Rotherhithe Theatre.

"We did our little set, then worked with the puppeteer. He then did an adult Punch And Judy show. Over four nights we performed to 24 people. On the last night, only four were there and we ended up taking them for a drink in the local pub!

"After that night, we decided to have a band and write songs. The second memorable night very early on in my history with the band [Random Hold], was playing at the Rock Garden, supporting Adam And The Ants, when they were a punk band.

"We were spat at, shouted at and had pints of beer flung at us. We lasted five songs. Later, the police arrived as there'd been stabbings and the bouncer had been bottled. We'd got off lightly."

"On big shows, I have a few guitars which my tech, Chris Lawson, looks after and tunes. I go through my pedalboard, which was put together by Chris and Daniel at TheGigRig. Then I go into a TC 2290 and out, in stereo, to a pair of big Rivera amps and into a stereo 4x12.

"On the Kate Bush shows last year, I used a pair of small Rivera combos, rather than the big setup. On my shows, I take as little as possible, because I have to look after it!"

"Give the sound engineer what they need. Keep it clear. I stay well away from reverb."

Your best tip for getting the audience on your side?

"Do what you do with commitment. If they don't like it, they can leave. I remember hearing a story that Tom Petty would say that his mum was from whatever town he happened to be playing in. I'm sure that would always work. Tricky, though, if you get called on that one in Europe and your language skills aren't great."

Which is the best venue you've played in, and why?

"That's a tricky one. Some places are great because of the audience, some for the backstage or stage areas, some for fabulous catering, some just for the vibe.

"The one that comes first to my mind is the Blue Note in Milan, where I played with my band. It had a wonderful feel to it. There were fantastic photos on the walls of some of the jazz greats who've played there. It had a reverential atmosphere. People go there to listen to good music.

What was your worst gig journey?

"Many years ago, I chose to ride a mountain bike from Amsterdam to Den Haag on the afternoon of a Gabriel show, Secret World. I thought I could do it riding gently in about three to four hours.

"I'd looked at a map and seen that it wasn't too tricky a journey. I cycled out to the coast and then hit a head wind, which slowed me right down. I hate to be late for anything, and in bands, it's generally only the singer who has a licence to be tardy.

"I rode for hours, missed the soundcheck and didn't know where the venue was. I stopped at some traffic lights on the edge of town and asked a woman next to me the way. She kindly led me to the arena, which was not in the direction she wanted to go.

"I thanked her and offered her tickets for the show. She politely declined them. I was shattered and very apologetic to whomever could be bothered to listen."

What's the best heckle you've had?

"One of the strangest things was when performing with an Italian singer, Franco Battiato, in an arena in Naples, seeing an elderly nun in the front row. It made me feel a bit self-conscious - however, she looked as though she was enjoying herself."

"I guess it had to be one time when, with Gabriel, we used to walk through the audience at the opening of the show, playing drums. We were playing in an old theatre in New York.

"Somebody had figured out that our best route was to go outside - it was winter, so very cold - and come in through a side door and then through the crowd. Unfortunately, nobody was manning the door, so we were stood outside for some minutes wondering what to do, hearing the intro music droning on."

What do you bicker about on the road?

"'Bicker', sounds a bit strong. Coffee and food seem to cause the most grumbles. Punctuality, or lack thereof, can make me a bit spiky, particularly with repeat offenders."

"The occasional private jet on a Peter Gabriel tour! British Airways seem easiest with carrying instruments on, so I try to use them. My worst experience was with Air Berlin; unhelpful and unbending."

"The one I listen to most is Keith Jarrett, The Köln Concert, which still sounds fantastic. I first owned it soon after its release [in 1975]. I read a short while ago that the reason Jarrett barely goes into the upper register is because the instrument was out of tune up there. Perhaps even the most talented musicians have a need for parameters and rules that help focus their intentions."