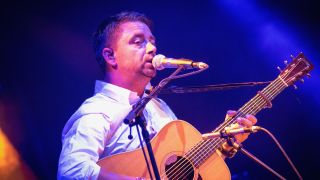 He has a burgeoning solo career on the neo-folk scene, and a taste for collecting Adidas trainers, Damien O'Kane discusses his thoughts on touring and playing live...

"My first gig, as far as I remember, was at school, having to play the banjo at assembly first thing in the morning with the entire school present. I was absolutely bricking it. Playing the banjo was so alien to pretty much all of my friends and something I actually kept a secret as I was embarrassed! I was 12 years old and I understood nothing, as after I played that morning, my friends were amazed. Not that I was some kind of rock god or something…"

"Tea, coffee, water and beer. I'm not one of these people that will ever have a massively extensive rider with loads of ridiculous stipulations on it. As long as we have a few beers, we're happy."

"I play Collings guitars, a custom-made guitar and tenor guitar made by Peter Barton - one of the top luthiers in the world - a tenor guitar made by another great maker, Andrew Brown from Kendal, and tenor banjos made by Phil Davidson and by the Fairfield [Banjo] Company. Interestingly enough, along with Leon Hunt, I designed the Fairfield tenor banjo. That was a great thing to do, to play an instrument you've honed to your liking."

Any tips for good live sound?

"Having someone on the board out front who knows exactly what you're trying to achieve. With my music at present, it's old traditional songs, mainly from the North of Ireland where I come from, but arguably treated in a way not done before. Electric guitars, a huge kit sound, pads, synths, organs, pianos and my acoustic stringy things, along with lots of interesting effects and noises. It's a difficult gig to get right out front."

"It would have to be one of my pairs of Superstar Adidas Shell-Toes. They are just so comfy and I love wearing them. I think I own about 20 pairs now."

"A sense of humour - a bit of comedy. Showing people that you are just a normal person the same as they are helps immensely. Some have made a living out of being a total wanker, so is it a case of staying away from the middle ground? Being really nice or just a twat! I don't know, but I just want to be nice to people and show them I appreciate their support."

"I think I'd have to say Sheffield City Hall. I've done it a few times with the fabulous Kate Rusby [Damien's wife] and it is just a wonderful space. The vocals sound especially sublime in there. It's a bit like I'd imagine it sounding playing at Croke Park in Dublin or Wembley Stadium, just a bit smaller."

"If getting lost backstage is classed as a Spinal Tap moment, then count me in, several times. I have a terrible sense of direction and some venues have so many stairs and doors to challenge you. I get completely lost sometimes and have been late getting on stage because of it. I also once got to a gig, opened up my guitar case and there was a tiny banjo in it, no guitar. Interesting gig…"

What do you bicker about on the road?

"Where to have lunch or what time to leave the hotel in the morning. Every day revolves around food, apart from the gig, of course. Getting decent meals becomes more important as time goes on and when people don't get one, it does start to cause tension."

"As a musician, I find Ryanair to be the easiest. They have a pretty bad reputation, but if you follow the guidelines - which admittedly are very hard to find sometimes - you'll be fine. I've travelled a lot with them and I regularly book a seat for my guitar and a seat for my banjo.

"I'm sandwiched by my two instruments, which means I have the whole row to myself, but also I have the contentment that my prized possessions are next to me and not underneath, where anything could happen. Plus, it's always less expensive to book my instruments a seat, so it's a win-win for me."

What's been your finest hour onstage?

"It would be my most recent gig with my new band in Belfast. I have a great bunch of lads in the band - Steven Iveson from Coleraine on electric guitar, Cormac Byrne from Waterford on kit, Anthony Davis from Birmingham on keys/pads/synths, Steven Byrnes from Kilkenny on acoustic guitar and percussion, and myself on guitars, tenor guitars and banjo.

"We had some launch shows of my new album [Areas Of High Traffic] recently and we finished with a homeland gig for me in Belfast at a great place called Duncairn Arts Centre. It was a packed house and we kinda smashed it.

"I'm incredibly excited about where I'm taking my music now and my new direction has been very well received. No better great response than a home great response! Playing with Kate Rusby at Hyde Park [BBC Radio 2 Live in The Park] this year, as well. Two very different gigs, but equally enjoyable."

Areas Of High Traffic is out now on Pure Records.