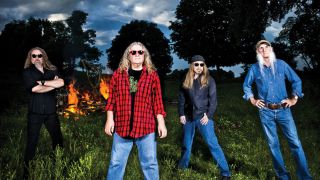 They've been together for the best part of 50 years but this summer the Kentucky Headhunters finally make their European bow.

Lead Headhunter Richard Young tells TG that his fear of flying has put the brakes on the band venturing outside of the US until now. But, the persistence of Southern rock titans Black Stone Cherry (a band featuring Richard's son John Fred on drums) has finally led them to these shores for seven UK shows.

"John Fred and the boys were always saying we need to get over there," Richard says. "They came home from their last arena tour and said, 'The jig is up. It's put up or shut up, we're reaching out to Live Nation and asking them to put on some dates for you.'

The country rock heroes might make it to the UK, but alas, their guitars will not.

"It will be the first time we aren't playing with our 50s guitars, I just can't bring Danny over," Richard says. "I can't bear the thought of anything happening to Danny." Danny, it transpires is Richard's 1952 Tele.

Back in the van

While in the US, hits such as Dumas Walker and Walk Softly On This Heart Of Mine have afforded the Headhunters a degree of comfort on the road, they will have no such luxuries when embarking on their European shows.

"The other big question aside from flying is that we're playing eight straight shows, that's going to be pretty trying for us 60-year-olds," laughs Richard. "We're spoiled in the US, in Europe we're roughing it in a van, a far cry from a tour bus… but this way we'll see all of that UK countryside."

Approaching bus pass age they may well be, but Richard is adamant that the Headhunters, who also have a new album in the works, will be bringing an electric live show across the pond.

"We're going to come on like Gangbusters," he says. "We feel like we've got something to prove to the UK audience. We're a live band and we're going to show people that."

Kentucky Headhunters' UK tour begins at the Borderline in London on 20 July.