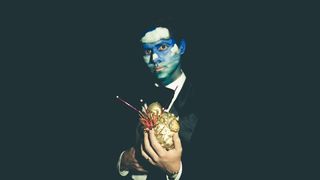 Suffering for his art...

Intelligence: It started with a library card. In October 2004, a penniless Ryan Lott was holed-up in his Cleveland attic with nothing but a laptop and a stack of classical CDs. In between applying for equipment grants, he began crafting Weapons, the centre-piece of 2008 debut album At War With Walls And Mazes - and the first the world would hear from avant-garde producer Son Lux.

"I didn't have any budget, so I mined the classical section of the library," explains Lott. "I developed a very tedious process of listening for specific notes on recordings and figured out a way to arrange music from samples, but instead of just looking for old soul tracks, I was looking for chamber music."

Trained in composition, Lott approached his source material with a more open mind than your typical crate-digger.

"My ear was drawn to those textures and ideas, but my mind was in hip hop," he recalls. "So the way I assembled it and put it together is what I learned from hip hop, but I learned what to look for from growing up studying classical music."

It's an approach that Ryan has continued to refine. 2011 album We Are Rising - created in just 28 days following a challenge from NPR - developed his blend of Radiohead/Bjork-like twisted pop and considered classical arrangement. It caught the ear of the right people and he's since contributed soundtrack work to the likes of Looper and Assassin's Creed, plus the forthcoming Disappearance Of Eleanor Rigby.

Meanwhile, new record Lanterns is something of a masterwork, a breakthrough that melds Animal Collective's eclectic glee, Purity Ring's dark hip hop and Arcade Fire's talent for arrangements into something that's somehow peerless and utterly unique.

Individuality is everything to Lott and he pays the price for it. Even his software choices are at odds with the rest of the world.

"I have Digital Performer as my DAW, along with four other people on the planet," he laughs. "I love the idea that I'm not using the same tool that everyone else is using. Everybody making music is essentially looking at the same really uninspiring and crappy GUI - that has to have some kind of conforming effect on the way people think and create music."

In addition, Lott builds his own Kontakt instruments, even extensively multi-samples drum kits purely for private use. As a result, he reckons there could be "potentially thousands" of hours behind any given track on Lanterns. Perhaps, we suggest, Ryan's creative self-flagellation is influenced by the classic composers that kept him company in that Cleveland attic, nine years ago…

"That's true!" he says. "It's that masochistic discipline, for sure, because the reward at the end of it is… Well, it's worth it, you know? I think that's a big lesson I learned with At War With Walls And Mazes. To push myself to find more from less, because I was totally poor - all I had was that library card."