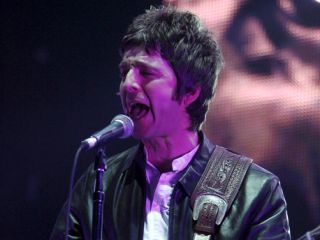 Noel Gallagher is talking about becoming a frontman ahead of the release of his solo debut. © HERBERT P. OCZERET/epa/Corbis

"I don't have enough material for the time being not to do Oasis songs, but I would never just give up on them," says Noel Gallagher. "They're great songs and they're my songs, you know? People want to hear them!"

Following the recent New York preview of his forthcoming solo debut, Noel Gallagher's High Flying Birds, the singer-songwriter and guitarist spoke to Spinner about the prospect of becoming a frontman - and how his mother is actually responsible for the feud between him and his brother Liam.

"I haven't got any new moves," he says. "I've toyed with the idea of taking up juggling, just so it would be interesting for the crowd. I've got nothing to say - and the worst part of being a singer-songwriter is when you're in a band, you can sing any old shit, like 'A-wop bop-a loo-mop' and fucking all that, but when you put on an acoustic guitar everyone's like, 'Shhh! This guy's got something to say.' I've got nothing to say."

Elaborating on his new role as the focal point in his own band, Gallagher says, "When you've got 15 minutes to prepare for it, you just do it. There's something about having a new album where it's you and you've stood up in the middle of the stage.

"For 20 years, I was at one end of the stage, and the band was at the other, and I'd play facing the band and do the backing vocals and I could see everything. Now, when I've been rehearsing in England, I'm facing this wall and all the band are behind me. I can't see anything and it's freaking me out... We'll see how it develops, I guess."

As to his ongoing battle with Liam, Noel puts the blame squarely at the feet of his dear old mom. "She's a nightmare," he says. "In fact, she was the catalyst for all this [laughs]. She is a shit stirrer, though. I'm only joking. That'll end up in the British press, that exact comment. I bet you any money."