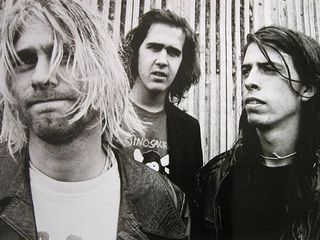 However, there is video, and in Novoselic's words, it's "a lot of video." He didn't detail the content and nature of the videos, but since he and Kurt Cobain's widow, Courtney Love, are now on good terms, the possibility that material could be issued sometime in the future exists.

Since Kurt Cobain's suicide in April 1994, there have been several posthumous releases, not least the single You Know You're Right. "[The song] was a big surprise with people," Novoselic said. "I had that master tape stashed and I didn't tell anybody."

You Know You're Right was released in the fall of 2002, after years of legal battles between Novoselic, bandmate Dave Grohl (now of the Foo Fighters) and Love. The song was the last that Cobain, Grohl and Novoselic recorded together during the band's final studio session on 30 January 1994 at Seattle's Robert Lang Studios.

During a lengthy interview with Washington State's Legacy Project, Novoselic rejected the notion that he balked at joining the Foo Fighters. "I didn't balk at it at all," he said. "No, Dave just went and did his own thing, and I did my thing. I think everybody was dealing with things. I was dealing with things in my way. And then Dave put a band together."

The bassist went on to express regret that he didn't do more to try to save Cobain. "There's anger. There's regrets. I was angry. It's just a waste. You know it was the fucking drugs," Novoselic said. "All in 20-20 hindsight, you know. Kurt called me the first time he did heroin and he told me he did it. And I told him, 'Don't do it, man. You're playing with dynamite.'"

In 2004, a box set called With The Lights Out contained the track Do Re Mi, a haunting, lo-fi home demo recorded by Cobain in 1994. The song was apparently destined for the 'next' Nirvana record.

In interviews several months before his death, Cobain hinted that he wanted to go more acoustic, psychedelic and diverse, perhaps along the lines of The Beatles' 'White Album'.

Nirvana touring guitarist Pat Smear is credited as having played on Do Re Mi, but there is rumoured to be a more fully-realized, unreleased arrangement in the posession of Courtney Love which featured Smear on guitar, Eric Erlandson from Hole on bass and Kurt on drums and vocals.

Love has been quoted in interviews as possessing many Kurt demos from the last weeks of his life - if so, that supports recurrent speculation about a possible Kurt 'solo' LP. As these technically aren't 'Nirvana' recordings per se, this underscores Novoselic's new quotes.