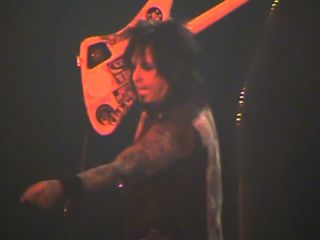 "Sorry for spitting and saying those rotten things...Oh, wait. No, I'm not"

Last week we told you about the special relationship Motley Crue's Nikki Sixx has with his fans, like the girl at a recent concert who Sixx threw a bottle at, spit at and said some very rude things to.

Well, being that Sixx does indeed have a special relationship with his fans, he's issued the following statement. While Sixx apologies to the fan for lobbing a bottle at her, he says nothing about the spitting, nor the over-the-top remarks.

Remember, this is Motley Crue we're talking about.

"There was a recent event at one of our shows where someone threw a bottle at me during my speech and I got pretty pissed. The way it happened is, I threw a bottle of water to some fans and didn't realize the very bottle I threw to the fans was thrown back at me. I have to admit, bands get pretty pissed when people throw shit at you onstage. I didn't even think it was the same bottle, so with that being said, I'd like to say I'm sorry to the fan who threw the bottle back at me.

"These damn cliches seem to be true, like 'two wrongs don't make a right...'

Should you want to relive Sixx's heartwarming stage patter, here's the video below. And we've even presented it from another angle.