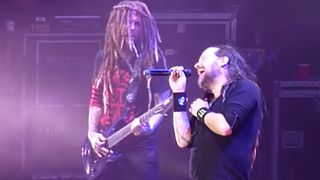 NAMM 2017: Now, here's an artist gear move we didn't see coming. As we reported earlier today, ESP's product preview for 2017 lists a signature model for Korn's Brian 'Head' Welch, a guitarist who has famously played Ibanez as far back as the band's 1994 debut.

Further digging has revealed recent video footage of the guitarist playing an ESP/LTD model with reverse headstock, which you can view below.

There are no images of the final look for Head's ESP model, but the seven-string will feature an EverTune bridge and the aforementioned Fishman Fluence pickups, as well as a neck-through-body design with flamed maple top over basswood body, three-piece maple neck with ebony fingerboard and a See Thru Purple finish.

Korn's Brian 'Head' Welch and James 'Munky' Shaffer were early adopters of the seven-string guitar, utilising Steve Vai's Ibanez Universe on their 1994 debut before securing a range of signature models over the years, including the K7 and, more recently, the KOMRAD20RS.

Head is still playing several Ibanez models on tour, so the jury's out. Keep an eye on MusicRadar for more details on Head's new ESP/LTD model as soon as they land.