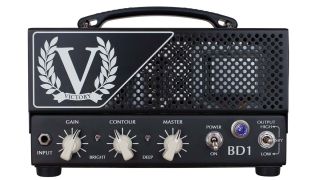 Aside from the finish, the BD1 shares its feature set with Chapman's guitar amp, eking 28 watts from a pair of fixed-bias EL84 output valves, with a single channel offering everything from clean to break-up and full-on overdrive.

A bright switch, deep switch and contour control offer additional adjustment over the amp's voicing, while output is switchable down to two watts for playing at home and recording - and the whole package is just 263mm wide and weighs 6kg.