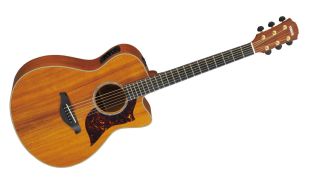 The Yamaha AC4K concert model - featuring a Hawaiian Koa top, back and sides

NAMM 2013 PRESS RELEASE: Yamaha adds the AK4 folk body and the AC4K concert models to the hugely successful A-Series guitar line-up, with two limited edition issues constructed using all-solid Hawaiian Koa back and sides, and a select solid Hawaiian Koa top - only 100 of these special instruments have been created for worldwide sale.

Featuring a slim neck profile with a rounded fretboard edge, the A-Series delivers ease and comfort, designed to be the workhorse of the performing and recording guitarist's arsenal, providing a memorable playing experience.

Focusing on every detail to create the feel and playability sought by today's acoustic-electric guitar player, Yamaha have also increased its traditional string spacing and lowered the action to accommodate today's varied playing styles. In addition, the semi-open pore finish on the necks of the A-Series maintains the wood's feel, yet also enhances playability.

Tonally these guitars do not disappoint, Koa's natural punch and clarity are evident in both folk and concert models and feature the new S.R.T. (Studio Response Technology) electronics developed by Yamaha.

The new S.R.T. preamp is an exclusive Yamaha technology, letting players choose from three different mic settings that can be blended with the piezo pickup, delivering on the often-elusive dream of providing studio-quality sound while playing live on stage.