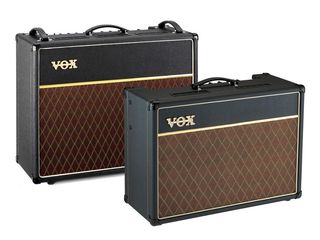 PRESS RELEASE: The Vox AC30 combo amp has been an icon for decades, known as the sound that powered the 1960s "British Invasion." Based on the classic AC30 design, the all-new Custom Series AC30C2 and AC30C2X offer numerous up-to-date enhancements, delivering the most versatile AC30 design in Vox history.

First introduced in 1958, the AC15 combo has been the amp of choice for countless guitar players throughout the world. Drawing on more than 50 years of amp-building expertise, the AC15C1 Custom Series offers maximum tonal dexterity.

An evolution in tone

Vox Custom Series amps offer two channels: Normal and Top-Boost. Each channel is equipped with its own Volume control, and the Top Boost channel offers highly interactive Treble and Bass tone controls. This powerful channel pairing provides an abundance of tone-crafting control, letting you dial in a classic sound that is all your own.

Both channels rely on the Tone Cut and Volume controls in the Master section. The Tone Cut control operates in the power stage rather than the preamp stage, allowing an additional degree of tone-shaping.

The Master Volume control works in conjunction with the individual volumes of each channel to create just the right degree of gain-staging. By balancing the individual and Master volumes, the Custom Series can deliver everything from a clean Vox 'chimey' sound to a powerful overdriven tone.

You can sweeten the sound of your Custom Series amplifier using the Vox Classic Tremolo effect. Both the speed and the depth are adjustable, allowing you to generate just the sound you want.

A warm Spring Reverb is also included on all Custom Series amps, adding spaciousness to the sound. The AC30C2 and AC30C2X also include an additional tone control in the Reverb section.

All Custom Series amps can use the VOX VFS2 footswitch, allowing you to turn the Reverb and Tremolo effects on and off as you continue to play. The AC30C2 and AC30C2X also provide an effects loop for incorporating your favourite effects into your sound. True Bypass switching takes the entire effect loop out of the circuit.

All Custom Series combo amps make use of three 12AX7 preamp tubes. The AC30C2 and the AC30C2X use four EL84 tubes to deliver 30 watts of power.

All models in the Custom Series offer a switchable 8/16 ohm jack for powering an external speaker cabinet when you need to speak with a little more authority; using this jack will mute the internal speakers.

Additionally, a second output jack - the extension speaker jack - allows you to run an extra 16 ohm cabinet along with the internal speakers for a fuller sound.