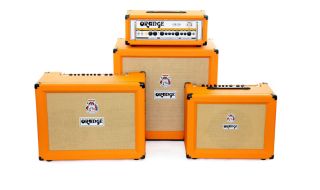 Significantly, the three new additions to the Crush range will be the first pro-level solid-state amps to be launched by the UK firm since the 70s. According to Orange, the pre-amp section has been modelled on the popular Rockerverb series and all of the amps will feature footswitchable clean and dirty channels, digital reverb and an FX loop. In addition, the CR60C and CR120C combos will use Orange brand 60-watt speakers.

While it's too early to speak for the sound, looks-wise they certainly tick all of the classic Orange boxes, featuring the much-loved 'hieroglyphic' control labels, picture frame edging on the cabinet and woven speaker grille.

What's more, considering Orange is marketing these as professional "no compromise" amps, the pricing definitely falls within the realms of 'reasonable', with the CR60C coming in at £349, the CR120C at £479 and the CR120H at £299.

That said, we're not sure how many will want to fork out £479 for a solid-state combo given the wealth of small (and very loud) valve options out there for a similar price, not least Orange's own Tiny Terror series. Another early concern is the lack of recording outputs, either in the form of USB or speaker-emulated outputs - pretty much a staple on new solid-state/digital amps these days.

Still, if Orange has really managed to cram Rockerverb tone into a solid-state amp then we'll be the first in line at Musikmesse next week.