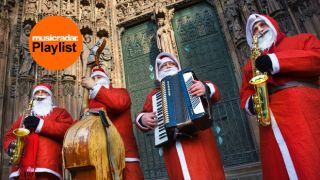 Before we temporarily sign off for a day of stuffing our faces with turkey and curling up in front of the fire with a massive glass of brandy, team 'Radar celebrate the festive season by picking their personal favourite Christmas songs.

Merry Christmas from everyone here at MusicRadar!

Sick to death of The Pogues? Breathe new life into a Christmas classic with Christy Moore's superb interpretation, which will both reveal the inherent genius of Christy to you and revive a song that has almost had the life overplayed right out of it. (Rob Power)

Last Christmas is a tale of heart-wrenching misery hidden beneath a smokescreen of jaunty, upbeat pop synths. Which is pretty much exactly what we all need at Christmas. (Si Truss)

Who would've thought that a Jew from the Bronx could produce the greatest Christmas album of all time (1963's A Christmas Gift For You)? And for good measure, Phil Spector teamed with two other non-Christians (Jeff Barry and Ellie Greenwich) to write the record's stand-out track, on which Darlene Love, pinch-hitting for a benched Ronnie Spector, knocked it out of the park, her voice bursting through the jingle-jangle-enhanced Wall Of Sound with a desperate yearning so heartfelt that it has sent shivers down listeners' spines year after year. (Joe Bosso)

Another cover of another classic, this time it's the elder Gallagher, once again embracing his love of Slade and making Noddy Holder's Christmas anthem sound like an Oasis b-side from 1995. Just the thought of that might make some of you feel sick, but nobody's asking you. I love it and it makes me feel as Christmassy as Santa's bulging sack. (RP)

A festive fixture thanks to his definitive take on The Christmas Song (Chestnuts Roasting On An Open Fire), Nat takes things up a notch on this lesser-known but spritelier Yuletide recording. It's throwaway, certainly, but just like a novelty stocking filler, it'll keep you (and the kids in particular) entertained for a day or two before being discarded. (Ben Rogerson)

Pretty much universally derided as the ultimate expression of Paul McCartney's thumbs-up wacky-Macca persona, rivaled only by We All Stand Together (Frog Chorus) as a legacy trashing booby-trap of a single, Wonderful Christmastime wasn't even that successful at the time, peaking at number 6 in January 1980, and failing to bother the Billboard Hot 100.