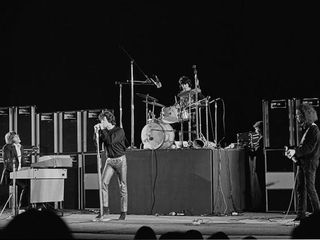 The Doors live. Now, who would want to arrest any of these nice young boys? (Image credit: Henry Diltz/CORBIS)

The Doors' 1967 show at the New Haven Arena in New Haven, Connecticut tops the list of most famous interrupted gigs, according to a recent poll by the ticket agency, viagogo.

During that performance - or half-performance - singer Jim Morrison was arrested on stage by police for breaking the state's obscenity laws and inciting the crowd to riot. (In a video below, Doors keyboardist Ray Manzarek gives a full account of the incident.)

Third place goes to Britney Spears for her May 2009 show in Vancouver. Britney stormed off the stage after 15 minutes, claiming the auditorium was too smoky and she was uncomfortable with the number of fans smoking marijuana. Spears returned to the stage 40 minutes later and admonished her fans for smoking weed.

2. 28 April 2007 - Bloc Party, Utrecht, Holland
Rampant sex stops the show. After a couple in the audience started getting it on, the crowd started cheering and followed suit. The band brought the concert to an early end. (Talk about premature climaxes!)

3. 8 April 2009 - Britney Spears, GM Place Stage, Vancouver, British Columbia
Britney Spears sulks off the stage, reportedly saying it was too smoky in the venue for her to perform. Fans were stunned at her reaction and booed her for leaving. When she returned, she told the audience not to smoke pot.

4. 7 June 1977 - The Sex Pistols, River Thames, London
Having just released God Save The Queen, The Sex Pistols performed on a private boat, sailing down the River Thames, past Westminster and the Houses Of Parliament. The event was designed to mock the Queen's river procession planned for two days later to celebrate her Silver Jubilee, but it ended in chaos with police forcing the boat to dock and constabulary surrounded the gangplanks on the pier.

5. 21 February 2008 - Vampire Weekend, ULU, London
The group abandoned the stage at the Shockwaves NME Awards Show after the fire alarm sounded mid-way through the appropriately titled The Kids Don't Stand A Chance, forcing the Brooklyn band and the audience to evacuate the building.

As for us, we would have voted for the many incidents during The Rolling Stones' free concert at the Altamont Speedway in 1969 (drummer Marty Balin for the opening act Jefferson Airplane got knocked out by a Hells Angel; later, the Stones stopped playing several times because of fights breaking out in the crowd - and then, of course, there was that horrifying stabbing).