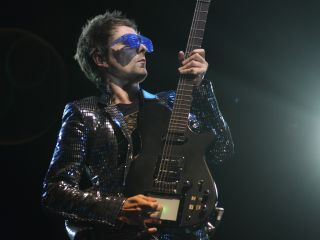 By now, we've grown accustomed to expecting big things with each new release from Muse, and that remains the case with the band's upcoming sixth studio album, The 2nd Law.

While it's too early to tell if the entire album will be a dubstep-influenced affair, at least one track, a portion of which is heard in the just-released trailer (above) points in that direction. The combinations of dramatic bass drops and Matthew Bellamy's intergalactic guitar sounds seem to be dividing opinion amongst fans, to say the least.

The theme of the record may be a high-concept one, as well, with the title apparently referring to the second law of thermodynamics. Bellamy recently Tweeted the words read by the news anchor in the clip:

"All natural and technological processes proceed in such a way that the availability of the remaining energy decreases. In all energy exchanges, if no energy enters or leaves an isolated system, the entropy of that system incre,cre,cre,cre,c,c,creases."

The 2nd Law will be released in September 2012.