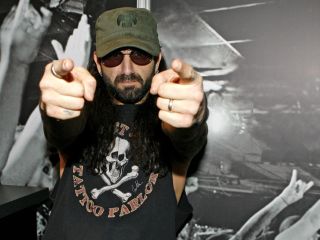 2011 isn't even half over, but already Mike Portnoy's dance card is looking filled. Since leaving Dream Theater last year and finishing his brief tenure as a replacement drummer for Avenged Sevenfold, the acclaimed sticksman is busying himself with numerous projects.

"I'm enjoying spreading my musical wings and collaborating with so many talented friends and musicians that I admire," Portnoy told NoiseCreep recently. "My musical taste has always been so broad, and I'm loving tapping into so many different areas and styles."

At present, he is working on a new band with Symphony X's Russell Allen on vocals, Mike Orlando on guitar, and Paul DiLeo on bass. Portnoy described the project as "something I'm very excited about. It's super hard-hitting, with strong, slamming tunes, with riffs as big as Zakk [Wylde] and Dime, and vocals as big as Dio. I think this album can make a huge splash in the hard rock and metal scene! I can't wait to hit the road with this baby!"

Portnoy has also collaborated with Steve Morse, Neal Morse (another Yellow Matter Custard member), Casey McPherson and Dave LaRue on an CD that "is filled with some great pop/alternative/singer-songwriter influences, but of course rounded out with great playing and musicianship."

And if that weren't enough, the superstar drummer just finished recording Neal Morse's latest solo album, Testimony 2, and will sit on the throne as part of Morse's live band. "I am looking forward to playing live with him for select dates throughout the US and Mexico in May," he said.

"I also have a few other exciting things in the works for the summer and beyond," he added. "I will continue to plant all of these musical seeds and watch them all grow like a proud farmer."