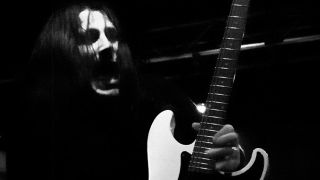 "It was always the intention to make it a to-the-point record."

When Taylor Hawkins' new band The Birds of Satan was announced earlier this year, the internet pretty much exploded.

First there was the polarizing name that got commenters frothing at the mouth, then it was bewildering decision by Hawkins, guitarist Mick Murphy and bassist Wiley Hodgden to kick off their debut album by blasting out an epic, nine-minute prog anthem. Just when the world had recovered from that they realised that the record also featured Dave Grohl, and everything went crazy again.

In a rare 30 minutes of calm, we got on the phone to Murphy to get the skinny on this latest mega-rock-star side project…

How did Birds of Satan come to be?

"A good friend of mine, John Lousteau, is a producer and engineer and works a lot at Dave Grohl's studio 606. We grew up in Tennessee together playing in bands. He sometimes plays drums in my main band My Ruin and he got me an audition for Chevy Metal. That went really well, I learned a bunch of Van Halen songs which was right up my alley and the next thing I know I was playing Chevy Metal shows in Chile."

How did that progress to this?

"Taylor decided he wanted to do a new album of originals and he wanted to have me and Wiley from Chevy Metal do it with him. We did it at 606 really fast in a week or so and it was a real rock 'n' roll, loose kind of vibe and a lot of fun."

"Taylor, Dave and I co-wrote an epic, nine-minute prog rock explosion called The Ballad of the Birds of Satan that I can't wait for people to hear. Dave guested on a couple of other songs as well and co-wrote with Taylor. I had a blast doing it. There's definitely a chemistry between us and we have a lot of fun, it's just bros hanging out and jamming. It's always a great time."

Was this very much Taylor's band, was he steering the ship?

"The album is Taylor's vision. Most of the songs came from him and then we all brought what we brought to it. I brought my guitar style, that kind of heaviness. It was a collaboration but Taylor was the spearhead. Dave had some ideas too and he helped out with arrangements."

What was that like, being in the studio writing with Dave and Taylor?

"It was really natural but kind of surreal too. I was totally stoked to be there. I've known Taylor and Dave casually for years so it was very comfortable. It was a learning experience as well, it was very inspirational for me as a musician."

It's a very eclectic album, jumping from prog to classic rock to stripped-down Foos-ish tunes

And Taylor once again proves that he has a hell of a set of pipes, right?

Did you have a go-to rig in the studio?

"I'm a Laney artist and I've been with them since 2006, so I used the IronHeart on most of the album. I think that's a great amp that you can get all kinds of sounds out of. You can get vintage to full-blown distortion to fuzz and there's a nice clean channel too. I try to use that on most of what I do.

"I'm with Grover Jackson's new guitar company called GJ2 Guitars. They just made me a signature model. I just got that so on the record I used the Glendora, which is their super Strat style guitar ala Eddie Van Halen. I used some Gibsons too and a Dean. For pedals it was an MXR and a CryBaby Wah."

There's some fantastic guitar moments on the album, it sounds like you were really able to get your teeth into these songs?

"I'm proud of all of the guitar playing on this record but there's a few solos that I'm really happy about. I like the solo in Thanks For The Line a lot. There's a bunch of moments in the Ballad of the Birds of Satan that I'm really into and I guess my favourite moment is the solo in Wait Til Tomorrow. That is just full blown, seat of the pants shred. That one was a lot of fun for me."

"I was really glad the decision was made to make that the first song. That makes me happy for sure, it's my favourite song on the record."

Why did you decide to include just seven songs on the album?

"I think it was always the intention to make it a to-the-point record. Sometimes there's more impact in doing that. You've got no time to lose interest, it keeps moving and leaves you wanting more. Sometimes I don't like it when an album is too long and you have devote a whole afternoon to listening to it."

There's a strong prog influence throughout the record, who are your prog heroes?

"I'm a huge fan of Rush, mainly the early Rush material. I got into music really young through KISS, Rush and things like that. I've listened to all kinds of heavy music all over the years, spanning from '70s prog rock to experimental hardcore punk from the '80s. If it's out there, interesting and aggressive then I will check it out. I'm a big fan of Rush, I loved a band called Crack The Sky, Yes is another great band that had some great moments over the years."

We have to ask, where did the Birds of Satan name come from?

"That's an inside joke for Taylor and his buddies. It's referring to partying all night and then that horrible feeling when the sun starts coming up."

Will there be a full tour?

"There are plans, but I have no idea what they are at the minute. But there will be shows. I am also coming to the UK with My Ruin. We've remained underground, which is fine with me. We're not for everybody. But Tairrie [B, My Ruin vocalist and Mick's wife] and I love this band. We've got a new record and we will tour the UK this summer in support of that. It's gotten more difficult and more complicated to do that, the industry has changed a lot. It's way different to when I joined My Ruin in 2000. We just do the best we can with what we've got. I wish the band toured more, but we do what we can."

The Birds Of Satan is out now.