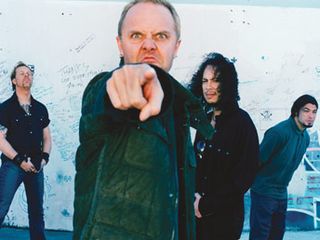 Metallica - you WILL watch our video

More footage of Metallica working in the studio working on their new album Death Magnetic has surfaced on the MissionMetallica website and on the band's own YouTube channel. This latest film shows Kirk Hammett jamming a guitar solo with the band, while last week's showed James Hetfield working out a melody with the aid of a keyboard. Sacrilege!

Still the new work in progress clip was enough to excite Total Guitar's editor Steve Lawson. "I definitely think there are flashes of brilliance in there, and I can't wait to hear the final version"

At Metal Hammer magazine, they reckon the clips are both "exciting and disappointing".

Says web editor James Gill, "Save Guns N' Roses' still yet to be released Chinese Democracy, there has never been a heavy record as eagerly anticipated as Death Magnetic. With such emphatic expectation comes inevitable disappointment.

"The new studio clips posted online are both exciting and disappointing: it's great to see that the solos are back, and that the classic Metallica sound of 1988 is back, but the clip reminds us that they will never be the young angry metal lords they became through the '80s.

"The clips do understate the reliable awesomeness of this band. Maybe that's the point. When they are finally unleashing new songs onstage the metallic might will seem like Thor's hammer in comparison to the domestic rehearsal vibe of the clips."

As MusicRadar previously reported, Death Magnetic looks like it will come in limited edition boxset form including a lot of the demos from the studio sessions. And according to one CD retailer, the date of release is 17 September. Finnish CD retailer Record Shop X recently listed that date on its pre-order page for the album, but the band and their record label are remaining tight-lipped about confirmation.

Death Magnetic was produced by Metallica and Rick Rubin, and marks the recording debut of bassist Robert Trujillo, who joined in 2003 shortly after the last Metallica album, St Anger, was completed.