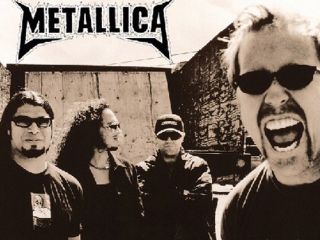 We've got a big package

While it still hasn't been announced or confirmed by the band or the record label, talk has been heating up about a special limited-edition box set of Metallica's upcoming Death Magnetic.

For hardcore Metallifans, it sounds like a spiffy little package: in addition to a physical CD, the box set will include bonus CD of 10 demos, a Making Of Death Magnetic DVD and an exclusive T-shirt. There's also swag like guitar picks, a Death Magnetic flag (who wouldn't want to wave out their window?) and a poster with pictures of the band members. The whole shebang is said to be packed in a "coffin box", which makes us think, Hey, a coffin box...Why not, right?

But Metallica-zised guitar picks and coffins don't come cheap, and the rumor is that the box set will set you back 115 Euros - that's $182 in American smackers. You have some time to save up, though - Death Magnetic is due for release mid-September.