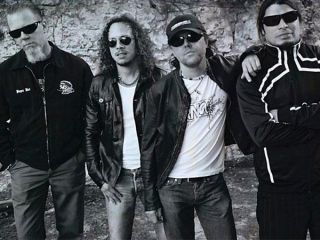 Metallica have recorded a cover of Iron Maiden's Remember Tomorrow for tribute compilation Maiden Heaven. It marks a welcome return for Metallica, who haven't released anything except a bunch of coffin-shaped rumours since St. Anger in 2003.

Drummer Lars Ulrich spoke about the cover: "We played Remember Tomorrow as it was basically the blueprint for songs like Fade To Black and Welcome Home (Sanitarium), and some of the more epic ballady type of songs that Metallica had done later".

Before gushing: "Iron Maiden are 10% cooler than every other band".

We asked Guitarist magazine's resident Iron Maiden expert and former High On Maiden axeman Simon Bradley, for his thoughts on the recording. After Ulrich's high praise of the song in question, it's fitting that Mr Bradley thinks it's the drumming that lets it down: "It's good that their version sounds both like Metallica and Maiden. That might seem obvious, but it's rarely the case with covers. The only shame is that Lars Ulrich's drums are everywhere, with over-the-top snare fills and that 'classic' bass drum clicking away".

"Kirk doesn't quite have the fire that Dave Murray had back in 1981 as far as the solo goes, but Hetfield sings the vocal part really well; not unlike an in-tune Paul Di'Anno. It's a fine line with one huge band taking on a tune from another but they pull it off admirably; hopefully the new Metallica album will be equally impressive..."

15 other Maiden-loving bands including Machine Head, Trivium and Dream Theater have contributed to the album, which comes with Kerrang! on 16 July.