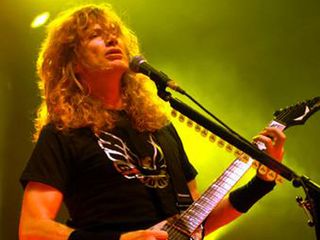 Although Megadeth mainman Dave Mustaine has the smarts to serve as a political correspondent for MTV News, when it comes to talking rock bands, he can still fit both feet in his mouth.

During a recent interview with Metal Hammer, Mustaine drew the distinction between an AC/DC concert and one by Megadeth:

Discussing Megadeth, however, Mustaine said, "With us, it's kind of like the concert's always the same but the records change! Because we go out live and what do people want us to do? They want to hear Holy Wars, they want to hear Rust In Peace, they want to hear stuff off of that record...Do I look like a fuckin' jukebox?"

This morning, Mustaine must've read his words with new eyes because he quickly issued the following comments via Classic Rock:

"I just read the [Metal Hammer article] about Acca Dacca, and I am so disappointed in how I said what I said.

"No excuses. I didn't say what I was trying to say, and what I said is rude and childish. Not my style (well, at least not my style for the last decade or so, thank God), and I am even offended at what I said.

"I have never in 30-plus years disrespected AC/DC, one of my favourite bands in the whole world; I think I just got too comfortable and forgot that we were recording and I was being an ass.

"My apologies to my friends, especially Brian [Johnson]; that just did not come out right at all and I'm sorry, bro."

Hey, he sounds sincere. So in this case, peace sells...and we're buying.