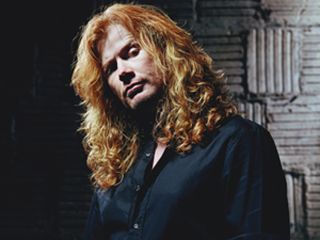 Dave Mustaine and Megadeth are preparing to start recording a new album, so says a statement issued on the band's website.

According to Megadeth's webmaster, Dave McRobb: "So.... I was talking to my beloved master [Dave Mustaine] tonight on the phone and he wanted me to let you all know that things are moving along oh so well with the brand new studio! The project is in its initial phases... large warehouse type deal... slowly converting into part deluxe recording studio... pre-production... start recording new album in fall! Reminiscent of Evolver, wouldn't you say?!

"In fact we (yes, master Dave M and I) talked about filming aspects of the process and who knows, eh? Sure do love them 'fly-on-the-wall' recording DVD's don't we all?! (heh, no promises yet on that one but it was definitely talked about!). So ya, Dave is quite psyched about this studio and getting the band in, and everyone else involved to lay down some tracks and put out the next stellar MEGADETH album! Ahh yes, life is good."