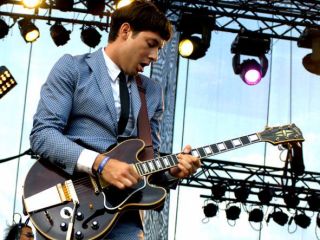 Mark Ronson will step out of the studio on 18 July to perform with boyhood heroes Duran Duran at London's Lovebox Weekender festival.

The producer, who is currently working with Duran Duran on their new album, has previously confirmed that their hit Wild Boys was the first song he ever learned to play, while Simon Le Bon has called Ronson "one of the biggest talents to have emerged in recent years".

There's a bit of history between the two parties, too - Duran Duran's John Taylor was a friend of Ronson's family when he was growing up.

It's not yet clear what Ronson's contribution to Duran Duran's performance will be - we'll find our when the band perform their headline set a week on Saturday.