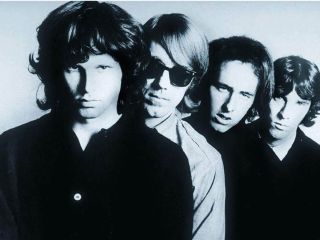 To celebrate the 41st anniversary of the release of The Doors's classic self-titled album are several band-related projects already in shops and on the horizon. First and foremost is an as-yet-untitled documentary that will chronicle the group's entire career.

"We have plans for a big Doors documentary film in the works," Doors keyboardist Ray Manzarek says. "I saw the first cut of it yesterday, and it's looking real good. But that won't be out 'til another six months."

Manzarek is mumon specifics about the documentary, but he did confirm that it would feature a large amount of rare footage. "That's the whole point of it. Never before seen! This is the anti-Oliver Stone [referring to the director's 1991 film, The Doors]. This will be the true story of the Doors."

Also out is a 16-track live CD, Live in Pittsburgh 1970, via Rhino. Recorded on May 7, 1970, the album captures The Doors during its final US tour with late singer Jim Morrison.

If that weren't enough, Manzarek is getting ready to hit the road for a European tour in July as part of Riders On The Storm, a group that also features ex-Doors guitarist Robbie Krieger (and former Fuel singer Brett Scallions).

Lastly, Manzarek is working on several movie scripts. "I've got four scripts. So what, who doesn't have four scripts," he says, laughing. "I've got a film script based on L.A. Woman, and another one in which three UCLA film school guys go to the desert to take peyote with the Native Americans at the Native American Church. They run into the people from the Native American Church - the peyote church. And all the shit that happens to them, you can imagine. Out in the desert, rednecks, psychic visions and reincarnation visions. Raymond White Eagle Daniels is the old wise man running the peyote ceremony. And that will, of course, never be made into a film, because it's about peyote. It's a journey into manhood."