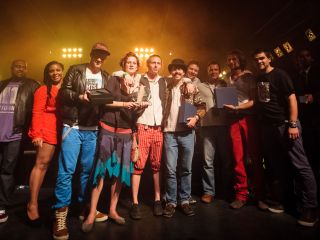 This year's Live And Unsigned winners: Coco And The Butterfields

Walking up to London's imposing and thoroughly rain-lashed O2 just before lunchtime on Saturday 14 July, it's clear that even for a venue of this magnitude, something sizeable is going on.

Scores of nerve-addled music-types are lining the palm-treed promenades, packing out the bars and restaurants and being calmed by supportive family members. Everywhere you look there's a different tribe of fans emblazoned in the colours and T-shirts of their chosen band, handing out flyers, stickers, lollies and anything else they think might tip the day in their favour.

It's that time of the year again - when the Live And Unsigned national final takes over the dome and musicians from all over the country congregate in the hope of taking home the grand prize - £10,000 cash and a 16-date run of UK festival shows.

Entering the Proud2 venue within the dome, it's already packed out for the Rock and Metal round, one of four final heats, and judges from across the industry have assembled to sort the wheat from the chaff - among them Adam Perry (Bloodhound Gang/A), Dayal Patterson (Metal Hammer) and Alex Baker (Kerrang).

"It was good fun. I was pleasantly surprised at how varied it was and it was good to hear that character. I think Contraband were the most memorable. They were ready to go. You could put them onstage supporting a big band and they looked like they should be onstage.

"That's the whole thing with these competitions - is to come out with a sound that it is ready to go and has a lot of character... It's prestige, if you do win a talent competition it's something else to talk about and it gives you a bit more clout when you're trying to push your demo etc."

It's Contraband that impress the most with a surprisingly good take on rap metal (despite the odds being stacked against them in that situation), plus a clever cover of an AC/DC Back In Black/Led Zeppelin mash-up that separates them from the other contenders. Later in the day it sees them take home the title for their category and with it a Natal drum kit, plus a spot on the bill at Butserfest as their reward.

However, for now, it's the acoustic round and we wonder if unsigned one-man acts will be able to pull off such a big show. However, Ed Sheeran's approach has clearly inspired a whole new generation of strummers and while there are a few copycats here, at least stage presence doesn't seem to a problem for most. Eventually it's Leon Bratt from Maulden in Bedfordshire who proves to be a worthy winner with his goosebump-inducing version of Bob Marley's Redemption Song.

Keeping the day moving quickly (there's scarcely a 15 minute break between the first three rounds), it's on to the third heat, encompassing indie and alternative acts. There are a couple of bands here making strong challenges - among them, RedStar ooze Kasabian-style danger and The Dirty Cheats come across as a well-oiled machine - but it's quirky hip-hop/folk (or "fip-fok" - their words) collective Coco And The Butterfields who most impress the judges with a genuinely unique blend of influences and a confident performance.

The fourth and final heat of the day, Urban and Pop, suffers some delays due to technical problems, but eventually blasts off in the same spectacular fashion as the first three: complete with pyro, dry ice and lasers galore.

"I think entering these kind of shows is a good idea, but it depends on what you're after. You've got to be realistic. If you look at the people that have won previously, are they as big as Kings Of Leon? No. But have they had fun and has it helped them in anyway? Probably: yes.

Unsurprisingly, it's features the most stagecraft in terms of props and costumes. Mee, in particular, is a bizarre breath of fresh air, showing her imagination with a group of backing dancers dressed up like tripped-out palace guards, complete with bearskin hats and giant lollipops.

It's a tight category, and there's some vocal fan support trying to sway the judges (among them Radio 1 Xtra's Ras Kwame and Kiss FM's Charlie Hedges), but it's R&B/pop singer/songwriter Molly that wins out, and gets a slot at Sundown festival for her efforts.

Following the Urban and Pop final we're treated to performances from past Live And Unsigned victors, including indie group The Lottery Winners and singer Lucy Spraggan. However, the entire room's mind is elsewhere: they want results and they want them now...

After a long day of music, the prize-giving ceremony is swift, with text votes and judges decisions taken into account to find the overall winners. It's announced - after eight hours of performances throughout the day, Coco And The Butterfields take home the grand prize of £10,000 cash and a 16-date festival tour.

It's been a long road to the O2 and anything can (and did) happen on the day, but you heard it from Live And Unsigned first: "fik-fop", it's the future...