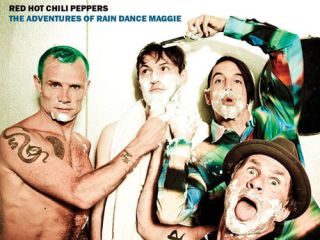 The Red Hot Chili Peppers have just released The Adventures Of Rain Dance Maggie, the debut single from their upcoming album, I'm With You (due 30 August). It's the first real indication of what the band might sound like with new guitarist Josh Klinghoffer in the fold. (Klinghoffer, as you recall, replaced John Frusciante, left the group in 2009.)

From Flea's Another One Bites The Dust bassline to Chad Smith's infectious use of the cowbell to Klinghoffer's sweet, soaring, Claptonesque bends in the rousing chorus, this is a track bound for big-time radio play on multiple rock formats.

Anthony Kiedis' vocal is pushed hard front in the mix, and is usually the case, his lyrics are open to interpretation: "Lipstick junkie be funky all he wanty/ she came back wearing a smile/ look-alike someone drug me/ they wanted to unplug me." Halfway through, however, Klinghoffer surprises with a sweeping, echo-drenched solo that starts out low, aching and grinding and winds up in the sonic stratosphere.

Check it out here, and after you're through, let us know what you think!