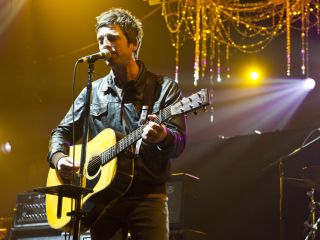 Noel Gallagher has fun in the 'Sun' on his newest song (Image credit: Paul R. Giunta/Corbis)

Noel Gallagher has unveiled a brand-new track called Shoot A Hole Into The Sun, which serves as a preview of material from his forthcoming collaboration with Amorphous Androgynous.

Recorded at roughly the same time as his first solo album, Noel Gallagher's High Flying Birds, the new album, which Gallagher worked on with the Manchester duo of Garry Cobain and Brian Dougans, will contain 13 tracks, 10 of which are originals.

"It's not an electronic record; it's a psychedelic rock record," Gallagher told MusicRadar last year. "Ironically, as there's not a lot of guitars on the current record, there's possibly too many on the next. There's a lot of guitars, with various guitar players doing a myriad of styles. Some of it's heavy jazz."

Shoot A Hole Into The Sun is the B-side to Gallagher's next single, Dream On, which will be released on 12 March. The as-yet-untitled new album is slated for sometime this summer.