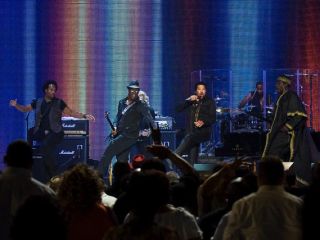 Easy does it: the not-quite-reformed Commodores on stage in New Orleans. (Image credit: Erika Goldring/Retna Ltd./Corbis)

Fans who witnessed Lionel Richie's performance at New Orleans' Essence Music Festival on Sunday got an unexpected surprise when two of the surviving members of his former band The Commodores joined him on stage.

Guitarist Thomas McClary and bassist Ronald LaPread made their unbilled appearance midway through Richie's set, joining the star as he sang Commodores hits Slippery When Wet, Too Hot Ta Trot and Easy.

There was also a Commodores medley featuring Fancy Dancer and Just To Be Close To You, while the semi-reformed band finished their slot with Brick House.

Richie has expressed his desire to take part in a full Commodores reunion, though a recent statement on the band's official website (original members Walter 'Clyde' Orange and William 'WAK' King still tour with singer James Dean 'JD' Nicholas but without Richie, McLary and LaPread) insists that this isn't currently on the agenda.

As such, Sunday's unofficial get together may be as close as we'll get to a proper reunion for some time to come.