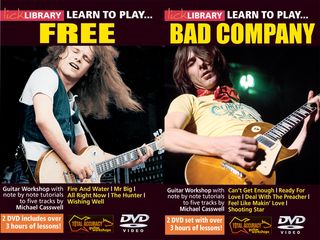 Free, with their minimalist blues-rock approach, were one of the biggest-selling British blues-rock groups, best known for their signature song All Right Now, a rock staple, which in 2000 passed 2,000,000 radio plays in the UK. Free lead guitarist Paul Kossoffwas one of the best blues guitarists in the world, renowned for his fluid, slow, melodic leads and bluesy guitar riffs.

Bad Company, one of the most acclaimed bands of the classic rock era, put its indelible stamp on rock 'n' roll with its straight-ahead, no-frills musical approach that resulted in the creation of some of the most timeless rock anthems ever. Mick Ralphs, lead guitarist, used rock, blues and even country influences, skillfully layered within songs to define the band's stripped-down sound.

These new double guitar tuition DVD's are both taught by Mike Casswell, the highly acclaimed and accomplished guitarist, a talented singer songwriter and producer. Probably best known for, touring with some of the greatest names in the music industry: Brain May and Cozy Powell.

"Learn to Play Free" (RRP £24.99) provides definitive step by step guitar lessons, showing you how to play massive anthemic hits such as Fire And Water, Mr. Big, The Hunter, Wishing Well and All Right Now(the original extended album version). Mike shows you how to master the classic "less is more" approach of celebrated guitarist Paul Kossoff by looking at his use of vibrato to get "singing notes", ringing power chords whilst playing simple emotive licks. Mike gives you the authoritative accurate way to play the legendary All Right Now riff.

Learn to Play Bad Company (RRP £24.99) - features in-depth analysis of how to play the number one single, Can't Get Enough, electrifying rock anthem Ready For Love, top ten smash ballad Feel Like Makin' Love which with Shooting Star and Deal With The Preacher have long since become concert and radio staples. Using Lick Library's characteristic synchronized split screen which enables you to see what both hands are doing, Mike explores the use of electric and acoustic (12 and 6 string) guitars in these classics.

Whether you are a beginner just starting out, or a fully fledged pro, the Lick Library team can help take your playing to the next level with a huge store of tips tricks and techniques designed to help make you a better musician. Lick Library tutors stay with you; work at your pace until you get it licked. From beginners to advanced, metal to jazz, electric to acoustic there is something for everyone.