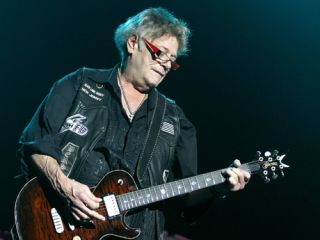 Leslie West, pictured in 2008 in Miami, Florida, has had his leg amputated. © Sayre Berman/Corbis

Leslie West is recovering from leg-amputation surgery in Biloxi, Mississippi. Best known as the guitarist for Mountain, West, 65, had flown in to Mississippi to perform at the Hard Rock Hotel and Casino with that band.

On Saturday (18 June), his leg began to swell, and West, a diabetic, was rushed to the emergency room. It was decided that an amputation was required in order to save his life. The surgery was deemed a success, and the procedure removed his limb up to the knee.

West faces extensive rehabilitation, but he is expected to fully recover. His family has requested that the public and media respect his privacy while he comes to terms with this life-changing transition.

From the '60s through today, West has been revered by artists and fans alike. His performance with Mountain at the 1969 Woodstock Festival caused a major sensation. West continues to remain current, as witnessed by the assemblage of artists joining him on his next album, The Unusual Suspects, which includes Billy Gibbons, Slash, Zakk Wylde, Joe Bonamassa and Steve Lukather, alongside Kenny Aronoff.

"These guys don't show up to play on everybody's albums," West said recently. "They're stars in their own right and fantastic players, everyone with their own sound and style, and about as far from 'the usual suspects' as it gets."

The staff of MusicRadar sends our thoughts and prayers to Leslie West for a full and speedy recovery.

The release date for the new album, titled The Unusual Suspects, will be announced soon.