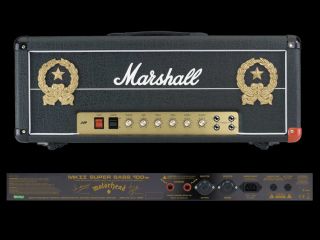 Hell-raising Motörhead frontman Lemmy Kilmister has one of the most instantly recognisable bass tones in rock, thanks in no small part to the combination of his distinctive Rickenbacker bass, and ‘Murder One´, his modified Marshall Super Bass amplifier.

It makes perfect sense then, that Marshall should announce a signature amplifier to honour the longstanding patronage of the hard-rocking four-stringer.

The 1992LEM is essentially a 100-watt Marshall 1992 Super Bass powered by four EL34 valves and modified so that elements of a Super Lead circuit are integrated, which is the key to the Motörhead bassist´s in-your-face tone.

Marshall has made every effort to source components from their original suppliers and manufacturers for authenticity, and the attention to detail extends to cosmetics that include replicas of Murder One´s golden crest insignias.

UK RRP is £1399, with a massive 4x15 matching cabinet an additional £750. For more information, visit the official Marshall website.