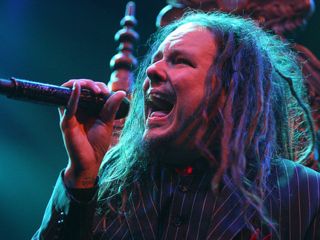 Korn frontman Jonathan Davis is working on his first solo album. The project is proceeding at a relaxed pace and is just in its early stages, with no release date or title available. It is also not known yet who will produce it or who Davis will ask to play on the record.

Davis has also been asked to record a new track for an updated version of the soundtrack to the Tim Burton film, The Nightmare Before Christmas.

In related news, ex-Korn guitarist Brian "Head" Welch has responded to recent comments that Davis made online, in which the singer said he missed Welch badly. The guitarist said that, that even though he feels the same, he isn't quite ready to rejoin his bandmates. "We went through a lot together and I love those guys so much," he said. "Even though I haven't done drugs in a long time, they remind me of the old me, and I don't like the old me. And I choose to stay away from those people right now just because of me. It's all me, it's nothing to do with them. And I miss them so much and I just, I know there's a day in the future where I'm gonna feel right about it and it's gonna be all good, you know."

On September 9, Welch will release his debut solo album, Save Me From Myself. The title of the album is the same as Welch's memoir, Save Me From Myself: How I Found God, Quit Korn, Kicked Drugs And Lived To Tell My Story, which was published last year.

Welch left Korn in 2005 to devote his life to Christianity.