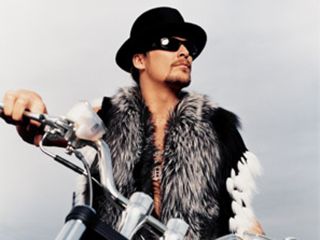 Kid Rock has put his follow-up to Rock N Roll Jesus on ice, but he's got a pretty good reason: he's hooking up with producer Rick Rubin to finish the 18-20 tracks he's recorded for the new album.

This comes as something of a reversal of Rock's statements from last March when he said he was "on fire" in the studio and was putting touring plans on hold so he could finish the disc.

Initially, Rock was looking to issue the the new album during the last quarter of 2009. But the success of Rock N Roll Jesus and the single All Summer Long has prompted him to reconsider his timeline - and he admits that he feels that the next record is crucial to maintaining his career momentum.

"It's hard to follow big records with another big record," Rock told Billboard. "I had most of [the next album] in the stages where I could go in and finish it up.

"Then Rick said, 'I look at these like demos, and we should go back in with the right players and re-cut everything...To really solidify into the big leagues, I think we have to do it this way.' And I was like, 'I'm open to anything.'"

And now Kid Rock is hitting the road with his band Twisted Brown Trucker, for a tour that begins in West Palm Beach, Florida on 26 June. The rap-rocker says he may test out some of his new material on tour.

"There's so many things you can learn from going out and playing your record live, things you might've done differently," Rock said. "So we're going to at least start playing them all in sound checks and screwing around with them every day.

"If nothing else, at least when we go into the studio we'll have a feel for playing these songs live."

Even if it means re-cutting songs and starting all over.