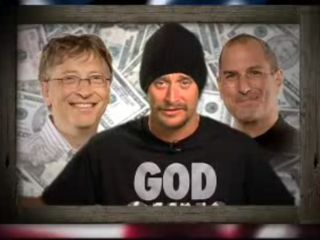 Rock flanked by two folks NOT guesting on his new album

Kid Rock was eyeing a spring tour to promote his still-big 2007 album Rock N Roll Jesus, but he's apparently "on fire" in the studio and plans to keep tracking while he's on a roll.

"I really feel like I've kind of got this figured out," Rock told Billboard. "I think I can make an equally good record, if not better than the last one."

The rapper and singer-songwriter admitted that aiming as high as the double-platinum 'Jesus' is akin to putting a ton of weight on his shoulders. "But I do like the pressure," he remarked.

Friends in high (and low) places

Rock has surrounded himself with a posse of familiar names and faces who have aided him well in the past. Working with him in his Detroit Allen Roadhouse studio are the Twisted Brown Trucker Band, along with good friend and protege Uncle Kracker, engineer Al Sutton and producer/engineer Mike E. Clark (Insane Clown Posse, Primal Scream).

If all goes right, Rock said he'll have the new album finished by summer. He plans on hitting the road before he puts the disc out in the fourth quarter of 2009.

No word on whether Rock will make the album available on iTunes (he's held product from the digital music service because of what he calls their "stingy" royalty rates). Right now, he's simply focusing on the tracks.

"We're at a point where you do something and then it's forgotten, and I'll have to prove myself again, and that's just incredible. People need to be reminded sometimes, and sometimes being humble doesn't do that so well."

A 'humble' Kid Rock? Frankly, we can't picture it. (Billboard)