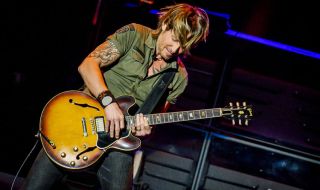 The Urban renegade himself, performing back in August (Image credit: Chris Schwegler/Retna Ltd./Corbis)

Country superstar Keith Urban has announced a run of limited 'Phoenix Edition' signature guitars to be sold exclusively through the US' Home Shopping Network.

Dubbed the Urban Collection, the line will include an electric and electro-acoustic and will come in three finishes - Brazilian Burst, Rich Black and Vintage Natural Ivory. According to the press release the guitars will form part of a '21-piece set' that will also include a custom amplifier, strings, strap and picks, plus two hours of instructional DVDs.

Following the sale, the plan is then to donate some of the funds raised to two music organisations, Mr Holland's Opus Foundation and The Grammy Foundation - both of which help to fund various school music education programmes.

"I've watched some of the greatest guitarists in the world perform and I've seen people just learning how to play," Urban told press. "The looks on their faces are almost always the same and the connection with the instrument is genuine."

There's no word on price yet, but given the 'bundle' packaging, the ethos behind the sale and the distribution method, we'd wager the instruments are aimed at the affordable/beginner end of the market.

Interested country fans and budding six-stringers can order from the Home Shopping Network from 3 November.