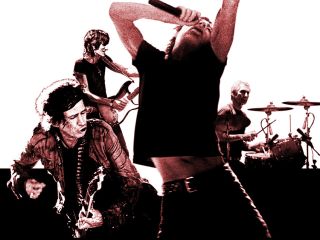 What do you do when you are one of the most famous musicians on the planet, you have an incredible collection of 3000 guitars but you only play 10 of them?

Currently appearing in cinemas across the globe in Martin Scorsese´s new Rolling Stones tour movie Shine A Light, the legendary Keith Richards finds himself stuck with that very conundrum.

Richards explains: “I have 3000 guitars and only one pair of hands. It´s an incredible collection of beautiful instruments but I only play about ten of them, and guitars have to be played. Maybe I will give them away or make a museum.”

Many of the instruments were gifts, which leaves the near-indestructible rocker somewhat bemused: “I don´t know what I´ve done to deserve that. I´ve been one of the biggest assholes in the world!”

The Shine A Light movie sees Richards donate one of his favourite instruments - a Guild semi - to Buddy Guy following the blues elder statesman´s onstage performance of Champagne & Reefer with The Rolling Stones, and this certainly isn´t the first time cameras have captured Keith Richards giving someone a close look at his guitar onstage.

With one down, 2999 to go, we can think of a few worthwhile homes for some of the guitars he doesn´t want…any chance of a donation to the MusicRadar team, Mr Richards?