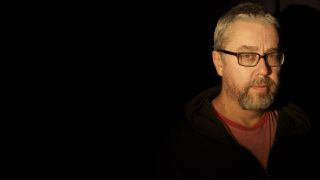 Wallinger is back with five cd box set Arkeology

Karl Wallinger is in typically humorous and self-effacing mood when he greets MusicRadar in a private club in London's Soho.

After more than a decade without releasing a record, it's the start of a busy schedule that sees World Party play a prestigious show at the Royal Albert Hall on 1 November, following on from a five-disc box set of previously unreleased archive material.

It's a welcome return to the spotlight for the man behind such celebrated albums as Goodbye Jumbo and Bang!, having spent several years recovering from a brain aneurysm that put his career on hold, and which might have threatened his livelihood, had it not been for the timely cover of one of his songs by a pop superstar.

"It was February 2001, half-term, and I went to Centreparcs with the kids. We were racing around on bicycles, and when I got back to our chalet I had a bit of a headache. I tried to get rid of it by having a lie-down, but after about half an hour I said to my wife, 'um, I think you better phone an ambulance...'. I've got misty recollections of being wheeled out, and then it was five weeks in hospital.

"What was weird was that the pain kind of went once the bleeding had stopped but there were strange games going on in my mind, it felt like I was tripping. I kept having visions of being in a carpeted stairwell with a skylight at the top and there was some faceless roadie plugging in leads all the way up. It was all pretty demented, but oddly enough I never thought I was dangerously ill.

"But it was astonishing looking in the mirror after the op, I looked like something out of a horror film; my head was shaved and it was as if I'd undergone some kind of punk rock brain surgery. If you look at my head now, you can see where I had my optic nerve clamped, the skull looks slightly caved in. It freaked me out a bit but I remember still feeling very casual about it. I don't know, maybe I was beyond being freaked. I never thought I was a terminal case, not once, I never felt 'this is it', but I could have died.

After five weeks in hospital, presumably you had a lengthier recovery period at home?

"I took things very slowly; after sitting around for a couple of months I did a small solo gig at the Union Chapel in Islington, a benefit for the art therapy classes they hold there. Edwyn Collins was top of the bill, and as you know he had an aneurysm a few years ago. There's so many people who've gone through the same thing, and thank god there are skilled doctors who are able to help us.

"All told, it probably took me four or five years to get back to what you'd call normal. In about 2005 I was wondering if I was ever going to work again, I kept asking myself 'is this the end?'.

Did your inability to work put a financial strain on you?

"Well, luckily Robbie Williams had a massive hit with She's The One, so the money coming in from that was a big help, I was able to continue paying my electric bill and keep the dog in Winalot, it was fine on that score. That was the luckiest thing ever. Royalties from my own recordings were OK, but nothing compared to what the Robbie cover brought in. I've had a few tracks going into movies, things like Is It Like Today? and Put The Message In The Box are always ticking over. I had a track on the second volume of the Armageddon soundtrack that wasn't even in the film! So, ultimately, I didn't have to downsize my lifestyle, I was able to keep my house and my studio."

What about being able to make new music? It's been 12 years since the last World Party album, Dumbing Up.

"When I eventually got back into the studio it felt a bit like there was tumbleweed blowing down the street. I found myself asking silly questions like 'what did we used to do in here?'. On the practical side of things, the clamp I had on my optic nerve means that I've lost some of the right-sided vision in both eyes, so when I'm sitting at the piano I can't see what my right hand is doing, all I can see is a thumb sticking out. I used to play piano by looking directly at my hands, using the shapes my fingers made as a kind of semaphore, so I had to get used to not being able to do that. That led to me subconsciously putting more emphasis on what my left hand was doing, so there was a kind of shift in my playing style that I had to work on readdressing."

"I just had to play a lot; practice, practice, practice, to re-educate myself, and it was the same with playing guitar. I'm left-handed, but I play a right-hand-strung guitar upside down - just like Jimi Hendrix and Bob Geldof, I'm somewhere in between the two of them! So I wasn't always sure where my hand was on the neck, and I found myself veering towards jazz when I didn't particularly want to!"

Did getting back to playing music work as therapy for you?

"I suppose so, in the long run, but initially it was just a wish to be able to do it again, to try and move forward. I didn't pick up the guitar and think of it as a therapeutic tool, it was more simply a case of thinking 'I used to be quite good at this, let's see how good I am now'. I knew I had to adapt in some way, I just needed to figure out how. I already had bad habits, the whole playing upside down thing for instance, so I just developed some new bad ones.

"But it was great to be back in the studio, surrounding by these physical things. The grand piano is like a creature in itself, like a horse - you keep thinking you should put a nosebag on it or something. Those things were so nice to go back to, and to get into the mindset of writing again. I've done quite a lot of new stuff over the last few years, although there's only a couple on the Arkeology set. There will be an album of entirely new songs some time next year."

Have you been writing about what happened to you?

"I suppose so, but in a fairly oblique way; the strangeness of it, the seemingly random thoughts that were spinning round my head when I was recovering, will be informing what I've written. There's one track that I really like called Reboot My Psycho which alludes to what I went through, although there's nothing as obvious as 'I had an aneurysm' in the lyrics. But it's not as if I'm writing differently since my health problems, I've always just followed the thoughts in my head, whether they've made a great deal of sense or not! It's still the same old jumbled-up world of Karl."

But has what you've gone through given you a more tangible sense of your own mortality?

"Well, it's bothered me, but it hasn't bothered me, if you can understand that. I seem to have a more 'couldn't-give-a-shit' attitude than I had before. I think that's coupled with being older as well, I'm 54 now, so I'm not as uptight about things the way I was when I was a younger man. The word 'maverick' was used by the music press when writing about me back in the day, and I think I'm probably a bit more of a maverick now. Why else would I be bringing out a five-CD set for my 'comeback', haha!"

Knowing your propensity for spending extraordinary lengths of time in the studio, five CDs of previously unreleased material is probably just the tip of the iceberg.

"I have tended to squirrel myself away for very long periods, so yes, there was a lot of material accumulated over the years to choose from. I think the total length of recordings in my iTunes library came to something like 79 days - but that does include just about every live show I've ever played. I decided to include two tracks that I'd been working on recently, Everybody's Falling In Love and Photograph, although the second one of those was started back in the early '90s!"

There's handful of carbon copies of Beatles tracks on Arkeology, mostly songs from The White Album, but there are more in the vaults, aren't there?

"Yes, I've done all kinds of Beatles things, there's a version of Penny Lane that I was really pleased with but for Arkeology I stuck with the ones I hadn't heard for a while. I actually had a DAT of my version of All You Need Is Love in my pocket when I first met George Martin years ago - it was like finally meeting Santa after sending messages up the chimney all your life - but I didn't have the nerve to play it to him."