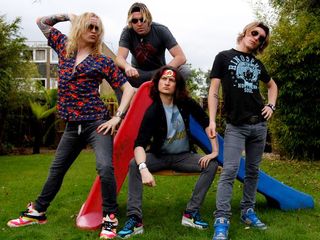 Hot Leg? Pull the other one

Former The Darkness frontman Justin Hawkins has named his new band Hot Leg. 'The Leg', as they are yet to be known, are just putting the finishing touches to their still-untitled debut album in a LA studio before embarking on a mini UK tour in August.

Rob Laing, chief scribe for the mighty Guitarist magazine, just delivered a glowing review of Justin's brother Dan's (and the other half of The Darkness) new band Stone Gods. We asked Rob for his thoughts on Justin Hawkins and Hot Leg: "Obviously the name is crap, that's probably the point knowing Hawkins' 'crazy' sense of humour".

"From the small amount of music heard it's telling that he's gone back to a classic rock guitar driven sound more akin to Permission To Land than the dodgy couple of pop songs he put out under the British Whale name".

"Hopefully those snippets are a sign of things to come. Not sure if it'll be too little too late though - he was the reason a lot of people disliked The Darkness after all and some may never want to hear that falsetto again. Still, he's a classy guitarist who knows his classic rock - and a talented songwriter too, and that often gets overlooked amongst the cat suits and wailing".

Stephen Marcussen, master of mastering at the LA studio, was asked for his favourite Hot Leg tune: "I'm not that familiar with it that I can make that call - there's nothing I didn't like".

That's not exactly reassuring considering Marcussen just sat there and mastered the entire thing. Let's just hope this marks a return to form for grandma's favourite Lycra-clad rocker, and not a one way ticket to obscurity… again.

Heard the new material? Add your thoughts below…