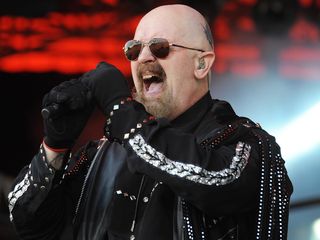 Oh yeah, did we mention that Nostradamus is a concept album? Not only that, it's a double-CD. A verrrrry long one too.

"That's what's so great about Nostradamus; you can listen over and over again and always hear something new," Bartek told the the Cleveland Plain Dealer.

Bartek, a 49-year-old truck shop worker, started his ritual of listening to Nostradamus on 17 June 2008, the date of the album's release. "I listened to it twice that day," Bartek said. "Which is a lot when you consider it's an hour and 45 minutes long."

Bartek's habit has earned him the nickname Nostradamus among coworkers and friends. And no wonder: Bartek has even started dressing like the infamous 16th century French prophet which Judas Priest based their manum opus on.

And get this: even his dog, Clarence likes the record. Says Bartek, "Whenever he hears me putting it on, he curls up on the same spot on the couch and listens with me."

Listening has its perks

Bartek claims he isn't looking to get in the Guinness Book for his daily listening sessions, but his bizarre feat did earn him a free third-row ticket to last night's Priest show in Cleveland, which was sent to him anonymously.

"I thought a friend sent it, but they're all denying it," Bartek said before the concert. "Maybe it was Rob Halford. I hear he wants to talk with me." (Judas Priest's manager did acknowledge Bartek in a statement: "Thanks for being such a supportive fan. It's much appreciated - glad you love the album so much!")

Ironically, Judas Priest are performing an entire album on their current tour. Unfortunately for Bartek, it's their 1980 breakthrough British Steel.

Even the real Nostradamus couldn't have predicted that one. Hopefully Bartek got a little bit of this action last night: