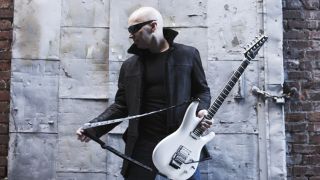 Joe Satriani will shower audiences with unstoppable guitar goodness on his US tour later this year (Image credit: Chapman Baehler)

With his brand-new album, Unstoppable Momentum, due out in a week (7 May), master guitarist Joe Satriani has just announced the dates for his US tour, which starts 29 August in San Diego, CA, and wraps 26 October in Oakland, CA.

The Steve Morse Band will serve as support on the tour, and given that Satch and Morse have been G3 mates in the past, it's probably safe to say that the two guitar wizards might find some time to jam on stage during this run.

The dates at press time are as follows:

You can read MusicRadar's exclusive track-by-track interview with Joe Satriani on Unstoppable Momentum here. The album can be pre-ordered at this link. For more on the tour, go to satriani.com for individual markets on-sale and ticket information.