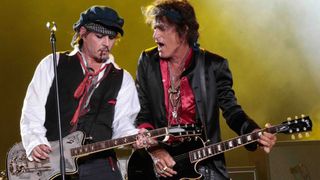 There's no denying the calibre of rock supergroup Hollywood Vampires, which counts Alice Cooper, Johnny Depp and Joe Perry among its ranks - but it turns out Aerosmith guitar legend Perry doesn't even rank himself the best guitarist in the band, as he sought lessons from movie megastar Depp, according to the band's frontman.

"There's a movie called Chocolat and he plays this gypsy guitar player," Cooper told EON Music. "He does all this Django Reinhardt stuff - and it's really him. It's not somebody playing for him.

"Joe Perry heard that, and he called up and said, 'Can I get guitar lessons from you?' So that's how good Johnny is."

All that gypsy jazz practice could go some way to explaining why Perry's Aerosmith bandmate Brad Whitford recently told MusicRadar that "everything always takes forever with Aerosmith".

And while we've taught you how to play guitar like Joe Perry in the past, it sounds like we need to give Johnny Depp the same treatment…