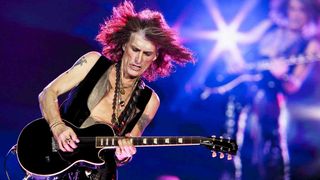 Joe Perry is an old-school Beatles/Stones-style rock 'n' roll guitarist with a loose improvisational style based around major/minor pentatonic and Mixolydian scales.

He once said that he "doesn't want to play in an Aerosmith tribute band", alluding to his freestyle, no-rules approach, and how he rarely plays a song the same way twice. He even switches between guitars and different amp and effect combinations depending on his mood on the night.

Joe's rhythm style includes open chords ornamented with hammer-ons and pull-offs, as heard in the memorable Livin' On The Edge intro riff, while his minor pentatonic/blues scale riffing adds the all important grease and sleaze to tracks such as Love In An Elevator and the drop D-tuned Just Push Play.

Perry also reveals his country influences on tracks like Hangman Jury, where he plays skilful slide licks on a lap steel guitar. The following examples give you a taste of Perry's trademark riffing style, his country-influenced slide lines and a classic pentatonic rock lead lick.

Keep your second finger on the 3rd fret of the second string throughout this riff, and use your first and third fingers to hammer on and pull off on the third string.

Use your first and third fingers to fret each pair of doublestops, and keep an eye on your fret hand during these big position shifts. Try fingerpicking and hybrid picking.

This riff is played in drop D tuning, and uses the cool-sounding D blues scale. Use your first finger for everything except the 6th and 7th frets. Bend the last note up slightly.

Joe uses an open E-tuned Chandler lap steel guitar for songs such as Rag Doll, but assuming you don't have one of those, here's a slide lick you can play in standard tuning.

This riff is played with a swung 16th note feel. As you alternate-pick, make your downstrokes last twice as long as your upstrokes (without exaggerating the motion). Follow the suggested picking directions to help you, but remember to keep your hand moving in a constant down-up pattern.