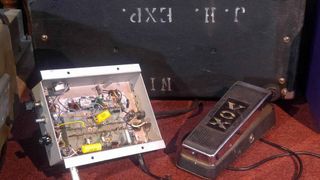 Despite its appearance, the Vox logo is actually the relief where it was supposed to be glued on.

The wah pedal that Jimi Hendrix used at Woodstock, as well as an amp used on early Experience recordings, are set to be auctioned early next year.

Amp guru Dave Weyer modded the V846 'Sepulveda' wah for Hendrix ahead of 1969's Woodstock Festival, and after extensive research has apparently asserted its provenance.

"It can be identified by the lack of a Vox logo on the front, the relief where the logo was supposed to be glued on, a West Coast sticker on the bottom, and Jimi's signature on the inside of the casing wall, applied at a difficult angle, but identifiable nonetheless," says Weyer.

"And, of course, the things he loved the most, the low noise and the sharp sweep, clearly audible in the Woodstock recordings."

A Guild Thunderbass amp is also going under the hammer, which was apparently used in Hendrix's early Experience days before functioning as a preamp later.

Weyer worked with a host of high-profile artists during the '60s and '70s, including Hendrix, Neil Young, Crosby Stills and Nash, Burritos Bothers, Vanilla Fudge, Three Dog Night, and Ike and Tina Turner.

The pedal and amp go up for sale on new year's day at J Levine Auction & Appraisal in Scottsdale, Arizona. For more info, head over to J Levines.