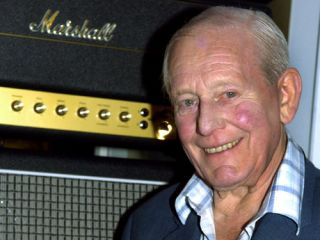 Since the company was founded 50 years ago, Marshall has become one of the most recognisable and iconic names in rock guitar, with the company's unmistakable livery gracing stages across the globe.

Jim Marshall started out as a drum kit retailer but began building amplifiers in the early 1960s, setting out to create a new valve guitar amplifier, using the Fender Bassman circuit as a model. With the sixth prototype, he hit upon 'the Marshall sound'. The rest is history.

By the late '60s, rock artists such as Jimi Hendrix could be seen playing against a backdrop of Marshall stacks. The mid-'70s saw the launch of the first master volume Marshalls and in 1982, the company introduced its now-classic JCM800 model.

Marshall was awarded The Queen's Award For Export in 1984, while 2012 sees the company celebrating 50 years in the business.

Jim Marshall will be remembered alongside the likes of Leo Fender and Les Paul as one of the founding fathers of the modern electric guitar sound and indeed the sound of rock music itself.

In an obituary posted on the company's website, Marshall Amps note: "in addition to the creation of the amps chosen by countless guitar heroes and game changing bands, Jim was also an incredibly humble and generous man who, over the past several decades, has quietly donated many millions of pounds to worthy causes."

It goes without saying that our thoughts at MusicRadar are with Jim's family, friends and colleagues.

An online condolences site will be made available shortly.