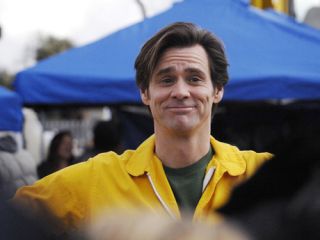 Is Jim Carrey a 'creep' or a 'rat in a cage'? Only he knows. © Phil McCarten/Reuters/Corbis

It's the video - or videos - of the week that are going viral: Jim Carrey showing up at Arlene's Grocery in New York City last Friday to sing a couple of alternative rock classics. A $20 million-a-movie man revisiting '90s gems - who woulda thunk it?

Carrey, apparently, who arrived at the venue with a camera crew in tow. Some have already speculated that the funnyman's rendition of Radiohead's Creep - and the band seemed to be tuned into his every move - was a response to his video message to actress Emma Stone. (Hey, we can't blame him there.)

But what to make of his impassioned and altogether convincing take on The Smashing Pumpkins' Bullet With Butterfly Wings? Besides being a kick-ass song, does it have a hidden meaning? Hmmm...

Check out the videos below and let us know what you think.